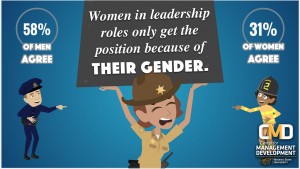 Women encounter different obstacles than the men that they work with in the workplace. While these challenges are many, today we’ll be discussing one of the more common issues: stereotypes.

Research performed on stereotypes in the workplace, particularly on females in leadership roles, has shown that these stereotypes aren’t just believed by men- they’re also believed by some women. One of the most common stereotypes, believed by both men and women, is that women only obtain a position of power within a company because of their gender. While it may not be surprising to hear that 58% of men believe this to be true, a whopping 31% of women agree with this statement.

So, what can be done to battle these established and incorrect stereotypes in the workplace? Educate yourself and those around you about them. Be aware of the stereotypes that still exist in today’s professional world and work to lead others in a way that does not perpetuate this train of thought.

To learn more proven leadership practices that will help you become a strong leader, build cohesive teams and develop excellence in others, check out our Leadership Certificate program!

Esther Headley, MBA, has more than 30 years of experience as a marketing consultant.  Active in the national Marketing Research Association (MRA) and the Society for Case Research (an academic organization), Esther received the prestigious Wichita American Marketing Association award of Marketer of the Year for 2009.